Yesterday morning I woke up to find a dead mouse in my dog’s mouth. I feed her raw meat with every meal, so roadkill can’t be too much of a stretch, right? Here’s what I found out:

Because wild animals aren’t pumped full of antibiotics, many argue it’s even more nutritious for your dog than store-bought raw meat. However, there are a few exceptions:

Is it legal for my dog to eat roadkill?

As of the date of this post, it is only legal to harvest roadkill in 27-states; and, of those 27 states, many require a license or registration of some sort. You can check the specific laws of your state here.

How do I know if my dog is okay after eating roadkill?

After eating roadkill, the biggest risk to your dog will be picking up unwanted parasites. Here’s what to look for:

Why do dogs eat roadkill?

Dogs are scavenging carnivores – which means their ancestors both hunted and roamed for dead animals. Most dogs will find roadkill from the pungent smell, which may seem gross to humans, but very intriguing to your furry friend.

Let’s go through all this in more detail.

I feed all three of my dogs a raw food diet; meaning, I put raw meat, bones, and veggies into their bowl at every meal. The practice of raw feeding is very controversial in the mainstream veterinarian community, with the majority of vets simply saying, “don’t do it.”

So, why do I ignore the professionals?

Because raw feeding mirrors what your pet would be eating in the wild. And, despite all the scaremongering from the veterinarian community, I have seen first-hand how raw feeding makes dogs healthier and happier.

For the sake of not straying too far off-topic, read my other article How to find a vet who supports a raw food diet to learn more about why mainstream veterinarian advice strays so far from reality.

I’ve transitioned three dogs to a raw diet – and so far, the biggest mistake I made was throwing one into the deep-end too quickly.

My oldest Boston Terrier, Ginny, switched from dry-kibble to a fully raw diet virtually overnight – and she got so sick we almost ran back to kibble with our tails between our legs. Instead, we ended up mixing wet food and white-meat and slowly transitioning her to darker meat and bones.

If there is one new health rule you swear by for your dog – anything but kibble.

Commercial kibble can have to 50% carbohydrates and low as 18% protein. Although dogs have developed some mechanisms to digest carbs, they are carnivores – so, while they will tolerate this type of diet, kibble will eventually lead to dental issues and degenerative diseases.

Kibble weakens your dog’s microbiome (the bacteria of the gut) and his/her ability to fight off dangerous pathogens.

So, while roadkill is completely safe for an adult dog with a strengthened microbiome from eating raw – a kibble-fed dog could get really sick from the bacteria and parasites often found in roadkill.

My suggestion for you kibble-feeders, if your dog ate road-kill, be extra attentive for any out-of-the-ordinary behaviors – like coughing, vomiting, or blood in the stool, and be prepared for a vet visit if necessary.

If your dog gets sick from roadkill, you’ll generally know within a few hours (dogs digest food much quicker than we do).

For owners who do feed raw, it may seem dangerous, but as long as the dead animal is relatively fresh (12-hours or less), then your dog has the tools to safely digest and extract all the nutrition from the roadkill.

How do you know if roadkill has been decaying 12-hours or less? A good general rule is if you see maggots or smell rot, just walk away.

And in a strange Venn diagram, both a segment of raw feeding enthusiasts and animal activists applaud the practice of feeding roadkill to your pets.

Here’s why roadkill is an even better treat for your dog than store-bought meat:

Last, roadkill is not suggested for puppies (especially before vaccinations) and immunocompromised dogs. What could be deadly bacteria & parasites for dogs with underdeveloped/performing immune systems are practically probiotics for a healthy adult dog.

That depends on if we’re talking about your dog’s safety or you and your humans’ safety.

When my youngest dog proudly walked in my house with a mouse in her mouth my mind shot to two places real quick:

Dog’s are carnivores by nature – not omnivores, as commonly believed; meaning, they’re able to handle the same deadly bacteria their canine ancestors would encounter in nature.

Humans, on the other hand, are omnivores. And even as far as omnivores go, we have a pretty weak constitution when it comes to bacteria. We shed the ability to safely digest raw food as quickly as we discovered fire.

So, as far as roadkill goes, it can be extremely dangerous for our pets to drag dead animals into our homes. At least for more conventional raw feeders, the meat we buy at the store is pumped full of antibiotics, which reduces our chance of catching Salmonella and E. Coli after handling.

That said, follow these simple rules to keep you and your family safe:

For keeping your dog safe from bad roadkill, ask yourself these questions:

Last, make sure it’s legal in your state – more and more states are adopting pro-roadkill feeding laws, but it’s still illegal to pick up dead animals in nearly half of the U.S.

P.S. – Rey was fine after her mouse meal, but I think she had a deeply emotional attachment to it – every time she’s in the front yard she seems sad. 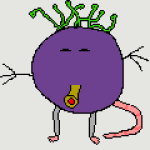